Many factors affect the extent of crop damage after a flood. Seasonal temperatures can be a major factor. For example, a July flood wreaks more havoc on a crop than a spring flood. The warmer mid-summer weather increases the rate of damage and death to submerged plants. During spring flooding, cooler temperatures allow plants to survive longer under water.

Plants that encounter flash-flooding along creeks where the water rises and recedes quickly are most likely to survive. They will experience less oxygen depletion than submerged plants. Other factors for survival include water movement and plant height. Standing water is more harmful than moving water. Plants with some leaves protruding from the water are more likely to live.

Restoration of alfalfa, irrigated pastures, perennials and hay will depend heavily on all of these factors, as well as the measures taken toward recovery.

Alfalfa can recover from moderate silt deposits. Silt deposits of over 2 to 3 inches will weaken the stand, and you may need to regrade and re-establish in places.

Limit reseeding of established fields to silted patches within the field. If the entire field is silted, rework and reseed the field. Where alfalfa stand is over two years old, overseed with temporary crop and reseed alfalfa at least one year after having reworked the field. Legume credits from the alfalfa can supply the nitrogen for a grass crop for a year.

Small areas with fast-growing grasses can be reseeded. This will help provide forage until the entire field can be reworked. In old fields, seeding to annual crops, such as ryegrass, will provide some hay and also will help control weeds. 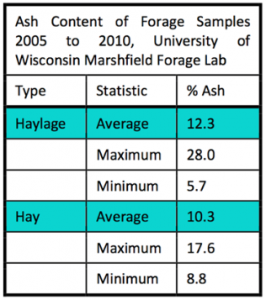 With pastures, there are two considerations:

The major considerations to animal health are increased deposits of silt and microbes on the plant material. The deposits of silt will reduce the energy content of the forage since animals are eating more soil and less digestible forage – this is generally not significant as plants will grow and dilute the ash content – though animal weight gain may be diminished for a short period. However, this can be significant for horses which are more susceptible to high sand content in their diets. For horses it may be necessary to allow pastures to grow to dilute the ash content or, if tall, to mow or harvest and allow regrowth to occur.

Of major concern should be any considerations of microbial contamination. If the water flowed past manure piles or came from sewage treatment plants, it contained microbes that many be harmful to grazing animals. The general recommendation is to wait 1 to 2 weeks after the water has receded to allow microbes populations to diminish.

The next concern is physical damage to the pasture by hooves of grazing animals. Animals can leave hoof depressions (pugging) that makes the pastures surface uneven for future grazing. Pastures that are composed of sod-forming grasses can be grazed first (e.g. bluegrass, bromegrass, reed canarygrass) and pastures composed primarily of bunch grass (e.g. orchardgrass, tall fescue, timothy) must be slightly drier before animals are introduced to avoid the pugging.

Most of the pastures grasses will survive a week or two of being under water. Longer flooding periods may require that pastures be reseeded with the desirable species. Legumes, especially alfalfa, will be more susceptible to damage from periods of standing water.

Most pastures will recover without serious production losses if silt deposits are not over 2 inches and erosion is minimal.

Recovery usually depends on the type of legume. Alfalfa probably will recover from moderate silting better than white clover varieties. White clover will not survive silting that covers the ends of the growing stems or stolons. Ladino clover, however, will fill in stands from a few surviving plants if the area is not too large.

Grasses such as ryegrass, orchardgrass, fescue and meadow foxtail will probably grow through a moderate silt deposit (less than 2 inches), and can stand several days of flooding without injury. Tall fescue will tolerate longer flooding than ryegrass or orchardgrass. Meadow foxtail and reed canary grass can stand longer submersion than other perennial grasses.

Subsurface water saturating the root zone of deep-rooted crops such as alfalfa can damage the plant as much as surface water. To take care of excess soil moisture, open drainage ditches as soon as possible.

Overly mature alfalfa or clover grass should be harvested and can be feed to animals having low energy and protein needs (heifers near calving, pregnant non-lactating animals),

Ensile perennials in either tubes or covered silage piles.

To make the silage:

Mature forages may be low on fermentable carbohydrate for ensiling. If available, add 100 to 200 pounds of ground corn and cob chop per ton of ensiled nutrients. This will improve fermentation, quality and palatability.

On fields mowed but not harvested just prior to the flood, make crop into hay or silage. Consider destroying the crop if the hay has laid in the field long enough to get slimy. Topdress field with fertilizer. Your county agricultural agent can assist with specific recommendations. Consider if flood water contained bacteria from sewage, running across manure piles, etc. If so, do not feed hay to horses. Also analyze forage for ash content and adjust rations for any elevated ash.

If growth is short or yellow, topdress immediately.